Harry Potter is just too big for a blog.

I was mortified when I realized that I haven't written on this blog since September 30th. 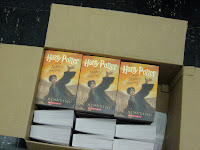 It's definitely not that I haven't been reading, but I think it's because I've been reading so much for school: my students have all created their own reading blogs and since it's so early in the process I feel compelled to read them all 93 every week, which has been happening over my Saturday morning tea rather than writing about my own reading experiences, per usual (which must change). I've also been preparing for the book clubs that are starting up in my classroom. This is the first time I have attempted to be in book clubs with students all year long.  A little crazy.  My brain has been consumed lately with Harry Potter and the Deathly Hallows.  While my reading focus has been on what my students' book club experiences will be like, I also realized that there are depths to be mined in old Harry Potter.  I've been overwhelmed by all of my thoughts that I have no idea where to begin, and this has snowballed as I've been reading multiple essays in Harry Potter and Philosophy and Reading Harry Potter: Critical Essays.

That being said, I'm currently looking to reinvent some healthier rhythms that don't involve quite so much work *and* I promise I'm on a mission to draw some serious conclusions about Harry Potter (though, I can say that I'll be rereading this series for the rest of my life, so I suppose I don't have to discover them all now).  For now, here are some of the biggest Harry Potter threads going in my brain (please do not continue reading if you have not read the entire series, and on that note, if you haven't read this series, I'm not sure what you're waiting for):

Tomorrow the Harry Potter 7 Reread book club begins their "pre-club" thinking work...developing the narrative arcs of the first six books in order to provide a foundation for our approach to book 7. My guess is that my conclusions won't be totally drawn until I've talked all this through with my brilliant students.  My hope is that I will be posting on the other aspects of my reading life before then, though.
Posted by Kristen Robbins Warren at 9:50 PM

I love that picture so much.

you guys are freaks.

i could back out.

Ms.Robbins, she just asked me who 'Black' is... I almost cried.

you mean she read on past my spoiler alert???

yes ms. robbins, yes i did.

but harry potter told me too. he told me it would help me interprete his weird books better.

i just did.
i did again.

watch out. all you harry potter weirdos.

she's got a mind of her own

this has made me laugh so hard. i have complete trust in the fact that audrey will come around, fall in love and wonder how she ever lived pre-HP. and, HP told me he can't wait and that it's ok for me and Nora to do a victory dance when it happens.

true, but then everyone will laugh at you. and harry potter will come down on his magic feather or broom stick or baton or something and cast a spell that will make you eat the sorcerers stone and play gigantic chess and then you'll know how he REALLY feels.

umm its called the nimbus 3000

ummm, wanton. and yes, yes that is a vocabulary word. and no, no i never heard that word in a harry potter book. but guess where i did hear it. in my vocabulary book. i think i *coughcough* deserve a sticker.

the only way harry could MAKE her play wizard chess is by using the imperius curse which is one of the 3 unforgivable curses and he would never do that to ms.robbins because she loves him

or maybe he's just trying to protect himself. maybe harry potter doesn't like all the attention.

maybe, if you really love him, you should LET. IT. GO.

also, she couldn't eat the sorcerers stone because if u had read the first book like u told me youd know that it was destroyed by Dumbledore and Nicholas Flammel

seriously! nora, you are good at the small details and the art of the argument. but i've got to say, audrey, that was a clever use of wanton. now, shouldn't you both go to bed??? it's a school night:)

alright now you're just boring me. I KNOW WHO NICHOLAS FLAMELL IS. he's the guy who was with harry's parents when they were killed and he jumped out of the way instead of sacrificing his life for them like a true friend. he's also the fat that the weesly family owns. it's all explained in the third book. NO DUH

oh no, it'll be a few more hours of this for sure. me and nora are on roll here.

bed... that sounds nice... nah i should start my homework

NICHOLAS FLAMMEL WAS NOT WITH HIS PARENTS, THAT WAS PETER PETTIGREW IM GOING TO CRY AT YOUR IGNORANCE

GIVE HER A TIMEOUT OR DETENTION OR SOMETHING THIS CAN'T GO ON!!!!!

Nora, don't give up on Audrey! She'll come around. Harry Potter rules!

Audrey , as in the words of mr streko, SHUT UP OR SHE"LL FAIL YOU!!!