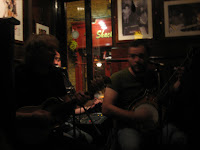 1. The huge window I am writing in front of…especially after a week of being sick and feeling trapped in the natural light-less bedroom and living room I occupy.
2. The Irish

About a month back, Julie and I downloaded quite a bit of Irish music after watching the fine movie “Waking Ned Devine” and reminiscing about the perfect night we spent in Dublin at the Temple Bar, listening to 3 sets of traditional Irish music with locals and tourists, Guinness and Bailey’s, clapping and laughter. I played these songs for my sweet roommates yesterday morning, the day of my people, and danced until we had to leave. To my excitement, the dj at the wedding reception we attended had the good sense to bring the Irish spirit to the dance floor. It may be true that there were all of 4 of us taking advantage, but still. The air was also filled with musical gems from Donna Summer, Paul Simon, Gnarls, Justin and Nelly as well, which lent itself to a celebration with old friends that any Irish would have appreciated.

It was no surprise that the spirit of Ireland was still with me this morning, so as I was writing I listened to “Appalachia Waltz,” an album where Yo Yo Ma, Mark O’Conner and Edgar Meyer combined their talents in tribute to American mountain music. I think that this is common knowledge, but I have my “History and Culture of Appalachia” class senior year at Miami to thank: the roots of American mountain music are found in the folk songs of the countries people left behind. This is what I actually want to write about today. Before you read on, I strongly suggest you download (seriously) the following two versions of the traditional Irish song “Star of the County Down:”

1. performed by Emerald Rose on the Celtic Crescent album, a common version similar to what you might hear in an Irish pub
2. performed by Yo Yo Ma, Mark O’Conner and Edgar Meyer on the Appalachia Waltz album that I mentioned earlier

I have spent a good bit of time dancing and laughing to the traditional version of “Star of the County Down.” It is the essence of laughter with friends. My further confessions are as follows: I have attending a “Britsh Isles Festival” in rural Ohio, coveted Julie’s “Ireland Forever” shirt. I am a direct descendant of the proudest Irishman I have ever come across. I have memories of my grandfather playing songs like this one while driving us around in his pickup truck, pretending to hate it along with my brother and cousins, but secretly loving my family’s heritage. My brother and I have outgrown making it a secret. In fact, he sent me a text message just the other day: “And goddamn I love being Irish!” This is the essence of the traditional version. You can’t help but want to dance and laugh.

The Appalachia Waltz version is a completely different story—literally. This story comes from an old Irishman remembering home. His melody is mournful as if his very heart is being pierced by the memory of family and friends and laughter. The intensity increases as the memories are lying on his heart, too heavy to ignore; he can do nothing but let them run through his veins and feel the intense beauty of it all. Toward the end his notes lift a bit, with closed eyes and a quietly smiling mouth; fully aware of his inability to cross the mountains and the ocean and rejoin that original song. But I picture him. Sitting, rocking; steeping in the fullness of home.

The window I am in front of right now gives me a view of sunlight and sky, a commodity in my life. I am not completely fooled, though; a 40-story building and industrial Jersey wave to me from across the way. My westward gaze is not toward what many would call grand, but its smell of soil and corn and wild flowers by the creek haunt my mind nonetheless.
Posted by Kristen Robbins Warren at 1:16 PM

my irish heart was dancing with you.

i mean, not really, but it probably was.

Believe me, your view of industrial Jersey is a vast improvement on mine of vacant lot full of trash! :)

My heart is Irish... and I suppose that counts for something.

And Kristen... be comforted by the thought that the smell of the creek and the earth and the leaves miss you as much as you miss them... they're waiting. You will see them again... "but not yet..."

I love you and miss you and want to eat an ice cream cone from the K with you.