A quick question on memory (well, quick to write, not to think about, hence this post.) 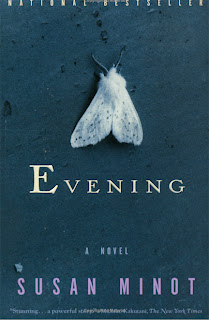 This summer I made writing goals with some of my students and one of mine was to write a short story. It is in the very early stages of drafting, but is centered on the idea of memory, born from how prominent a place it has in the literature that I read, so it didn't surprise me when another book centered on memory popped up--and for better or worse, it was asking some similar questions that I have been thinking about.

The narrative of Evening by Susan Minot alternates between the main character's present: dying in her bed in and out of consciousness, and her recollections of a single weekend from her past which has haunted her entire existence since. She met and shared an intense few days with a man named Harris and her entire perception of love changed--and herself right along with it. They parted ways and Ann went on to have three marriages and five children.

My question is if you can or should let one memory color your entire existence? I can't decide if it is deeply beautiful or incredibly sad.

This isn't a rhetorical question. I am soliciting thoughts and answers.
Posted by Kristen Robbins Warren at 12:33 PM